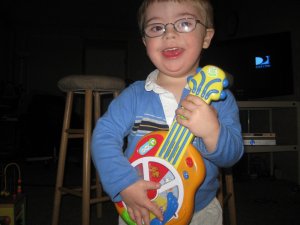 I have known for a few months that I wanted to get Kepler a guitar. He had played with his cousin’s guitar and clearly enjoyed himself. He has always been a huge fan of music and he loves to dance.

I planned to get one for Christmas, but my mom wanted to get it for his birthday, so I waited. Between one thing and another, she ended up getting something else, so off I went to the store to find one for him. I walked up and down every toy aisle in the store and only found big, brassy, electric, non-Kepler-like guitars. So, I walked up and down every aisle again and scanned the shelves more closely. I saw this little one and decided it would be just perfect for him. He is a pretty small kid, so this little tiny guitar would fit him just right, I thought.

He is clearly delighted with this toy. We have already played with it for several hours and I will be posting a video of him playing on YouTube. Kepler’s joy just seems to come through so clearly as he lives exuberantly.