Why have I not posted, you ask? Ah, who knows. Different reasons, different days. Let’s just focus on the present, shall we.

1. I worked hard on a friendship for a very long time and just recently this friendship ended permanently. I didn’t realize how much energy was being drained from me on a daily basis, being in relationship with this person. There have been many days since the ending where I have realized with relief that I was no longer going to be given the third-degree for things I thought or felt. It is so nice to be able to breathe and relax again.

2. I have fallen in love with summer this year. This may be due to the spiffy new deck Greg put on the back of our house. For the first time in 10 years, we have a place behind our house where we can just enjoy our backyard. Greg has done SUCH a great job on the deck and I spend time out there every day.

3. The other reason I have fallen in love with summer is because of my bicycle. I have had this fine bike since 1986, when it was a high-end bike, so it has lasted and is in great shape. I have a bike seat on the back for Kepler, and since he loves bike rides, we have spent a lot of time this summer riding around. Anna-Jessie and Joel also love to ride, and I love the time we spend together riding and talking.

4. The honeymoon phase with Crossroads is over. So now what? I still love what they are doing there, and I’m not going anywhere. I just wonder what’s next in terms of my involvement there. It’s a very huge place, and is definitely oriented toward seekers, which is fine. I just wonder what it means for me to be involved there.

5. I’ve come to terms with living a fairly isolated existence. I have my family, of course, and my family of origin is close by. But as for friends, I don’t spend time with people very often. Occasional lunches with a couple friends, nice chats with the people I come into contact with casually, a few discussions with people at church. But I had this idea of what I “should” be like, socially, and I’m not really like that. I think I have finally come to a place of accepting that the life we have chosen — me being a stay-at-home home schooling mom — means that I will be mainly at home, or with my family, at least for this season of my life. I am ok with that now.

7. I’m enjoying Major League Baseball this summer. I got turned on to baseball when I was around 8 or 9 years old. I was so proud that I knew who the pitcher was. I told my next-door neighbor, Steve, one of the boys I played daily games of baseball with in the cul-de-sac, “Hey, Steve, I know that Jack Billingham is the pitcher for the Reds.” He was not impressed. “He’s just one of them,” he allowed. I took it hard, as was my tendency as a child. But I still enjoyed baseball, and knew all of the players on the “Big Red Machine.” Cincinnati pro sports is usually a pretty depressing interest these days, but the Reds are doing well this summer, and it’s been fun to listen to the games. There aren’t as many radios around the house anymore, so I mostly listen in the car, a rare treat that I enjoy when getting to drive alone or with a sleeping child.

8. I am proud of what I have done this summer in redecorating our bedroom. The most exciting part was to use some 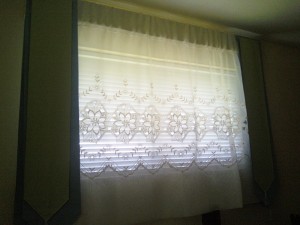 embroidered sheer that Greg brought me from Amsterdam in 1983. I had never been able to find a place to use the sheer, and finally decided that I was going to put it on our bedroom windows. I cannot tell you how lovely it is to have our room finished this way. This room had paneling on the walls for 1000 years, until we removed it earlier this year. Removing it caused quite a few problems which remained unsolved for awhile, as they were kind of beyond the expertise of the resident carpenters. But I fixed them — not perfectly, but adequately. I installed new baseboard, even cutting it myself by hand (Greg finished two walls when he got back from his canoe trip), and best of all, I made it all a surprise for Greg that he came home to after the trip with the boys.

Twelve was an arbitrary number. I guess I only have eight things on my mind. I WILL post again sooner rather than later!

2 thoughts on “Twelve Things on My Mind”