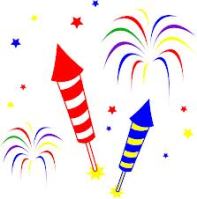 In the years following, they have kept up, and even increased the spectacle on the 4th. Although fireworks are illegal, I think our local police kind of give everyone a pass for that one day because there have been plenty of fireworks shot off in their yard. This year, their fireworks were so loud that Kepler would run into the house during prolonged explosions. I ran with him. I’m not the biggest fan of fireworks

My dear husband and son do love fireworks and had gotten some small ones to set off. I just had to laugh at the contrast between the huge booms taking place in the yard behind us, and the tiny little boomlets happening as our bottle rockets zipped skyward. Neighbor’s booms were bold72-point font with sixteen exclamation points after them. Ours were 6-point light, in parentheses.

So you can imagine our surprise when the police car stopped in front of our house and walked to our backyard to ask us about the fireworks we were setting off. Greg motioned to the yard behind us as the source of the giant booms, but the police still told us we had to stop as someone had complained, and once someone complains, they have to take action. We stopped immediately, and went inside.

We have our own Gladys Kravitz (character from Bewitched — very “observant” neighbor) living nearby and we suspected they called the police, owing to another time when the the city sent us a letter checking out something that was brought to their attention by one of our neighbors, something which was unfounded. I also suspected them because their front window would give them a view of the big booms, and they could have conceivably thought we were doing it since we were in direct line with our neighbors behind us.

I hate it that our neighbors would call the police on us. ESPECIALLY since our teeny little fireworks were both fairly quiet and unobtrusive. As we went inside, and I sat reading, I just reflected on the irony that with all the huge fireworks being set off before, during and after our miniature display, WE  were the ones the police visited.

I’d like to think that next July 4, maybe we will be living somewhere where we do not have loud fireworkers living directly behind us, and police-callers directly in front of us! If we are, well, I’m sure I don’t know how that bottle rocket ended up in your yard, sir!