It appears from events of today that there may be more addiction than recovery going on currently in the life of you know who. I think that’s why I have been powering through Johann Hari’s book, Chasing the Scream: the first and last days of the war on drugs. I found his book to be very interesting and to confirm some things I have observed about the criminal justice system and how it affects the lives of addicts. 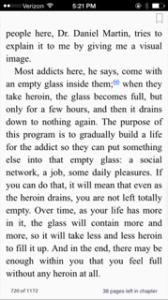 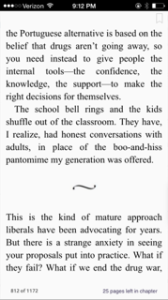 In our city, an addict is brought into the system due to arrest for possession or selling. Then, in order to keep from having a felony on their record, some defendants are allowed to go through drug court. Drug court consists of 12 hours per week of intensive outpatient program, a mandatory three AA/NA meetings per week, the requirement to have a job, random urine screenings, and periodic check-ins with the judge in a more informal setting. Just think of the hours involved in this: add driving time, and the required hours without the job can be as many as 30 hours per week. Then add in a job, which can definitely be made more tenuous by frequent needs to call off due to drug court requirements.

Today it occurred to me: what inner resources are these kids (addicts) expected to draw upon to not only stop using the drugs that make them feel better, but also to get their lives together enough to deal with all the waiting, the curve balls, the boredom.

Chasing the Scream is largely about the war on drugs, how it began and the dismal results it has produced. Of the above screen shots, here are the relevant quotes:

… the Portuguese alternative is based on the belief that drugs aren’t going away, so you need instead to give people the internal tools — the confidence, the knowledge, the support — to make the right decisions for themselves.

I still have days when I feel the urge to nuke my feelings with a well-aimed exocet of chemicals. When this comes, I try to remember what I learned . . . You don’t need a chemical, you need a connection.

I’m thinking of my son, yes, but all the other men and women who are in the program with him. It doesn’t appear to me that there is much going on in the way of giving people internal tools beyond information, or in helping them learn how to connect with themselves and others.

It seems like the program itself is rather a recipe for failure, which is why so many of the participants have been taking one step forward and two steps back for quite some time. When a participant has a positive urine test, for example, this requires another appearance before the judge, often jail time, and then the requirement to do 30 meetings in 30 days, plus scheduled urine tests three times per week.

This week we will be addressing the fact of my son’s “two steps back” and I don’t know what the legal consequences are going to be. I’d like to believe that the “system” knows what it’s doing when it works with addicts, but I’m not so sure that is the case. In addition to education, these young people definitely need to learn how to connect with themselves and with other people. They need to understand what authority is for, how to respond to people in power, and most importantly, what kind of personal power they have to effect change in their own lives. The people in charge of the groups need to have an iron first in a velvet glove, not just an iron fist.

Imagine if one of the assignments was like Seth mentioned the other night: [Addicts], write an essay explaining why the police were correct to arrest you; your parents were correct to ask you to leave their home; your job fired you; your significant other will not allow you to see your children. In the hands of a wise and caring leader, such reflection could build bridges and bring about healing.

Hari’s book asks many questions. He spent several years researching this book and it shows in the quality of the writing,a as well as his honest wrestling with the issues.

1 thought on “Chasing the Scream”