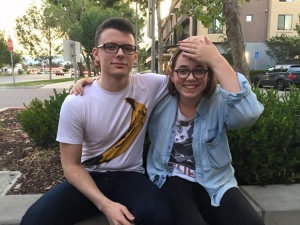 Recently, our 16yo daughter traveled out to California to visit her big brother, at his invitation. He shares a little about his experience here:

This is the last day of my sister’s stay in California (she flies out tomorrow morning at 7:30). She’s spent most of this week relaxing in a beach house 200 yards from the Pacific Ocean, watching Steven Universe and making s’mores, while back home my 19-year-old brother continues to work his way through addiction and recovery, which ends up being a higher priority than being a big brother.

At a conservative estimate, AJ has gone without a real big-brother figure for about 16 years, and without one at all for over 2 now, ever since I moved out. I have a little bit of insider knowledge on this subject: my girlfriend has been essentially abandoned by both older brothers for the past ten years.

I wasn’t really ready for how much I missed my sister. Even though I tried to play it cool (classic big brother stuff) I was beyond excited to see her, more than I’ve been in months. Suddenly everything seemed back to normal again, despite all the stress I’ve had in the last six months. It felt like it had been less than a day since I’d moved out.

As much as I might miss home, there are things and people and places in California you can’t find in Ohio. After years of keeping my head lodged in my own butt, I finally have a chance to show my little sister my world. I wouldn’t trade this chance for anything.

Our daughter had a most wonderful time with our son and his girlfriend and we were delighted she had the opportunity to visit him. Although a wee bit nervous about flying alone all the way across the US, she was a trouper, as we knew she would be. It’s a lovely thing to see our adult (and near-adult) children being their wonderful selves. Although not all the sibling relationships among our children are tight right now, I remember there was a day when I and my sisters were not the best of friends that we are now.

When Jude (California son) flew out for that initial job interview at 18 years of age, he was much different than he is now at 21. He has found an entire world out there that we don’t have in Ohio. I attribute a good bit of this to his girlfriend who first coaxed him out of his shell and then introduced him to many new ideas and experiences. I think it was she who helped him discover how much he wanted to be in relationship with his younger sister.

I know other parents who read my blog understand the joy in watching children become adults, and discovering who they are going to become. It has been one of the greatest joys of my life. And I think there is another trip to CA being cooked up by these two!