Years ago, our speech therapist recommended a new assistive augmented communication app called Touch Chat. The standard up until that time was ProLoQuoToGo, but Touch Chat was promising some new capabilities. Since i was going to invest $200 into an app, I decided to try this newest one.

We never really used it at home until this past weekend. Kepler loves it when I type out the full sentence of what he is trying to say. I know exactly what he means when he says, “Pretzels,” and I will often ask him to expand that into a sentence. He then says, “I need pretzels, please.” It’s a polite and complete sentence, but we can use the talker to model other varieties of sentences such as, “Mom, may I have a snack please?”

I believe I thought he would just naturally develop those varied sentences, but I am realizing that his talker is a tremendous help to him.

In addition to giving him a voice, I have begun to use it to communicate what I want to say to him. For instance, this morning while Toast, unbeknowst to me, was gnawing on Kepler’s glasses and strap, I was trying to coax my little warm bunny out of his den.

He told me he was tired. He said, “No bus.” He told me he was dead. He curled his toes into mollusk-like appendages that would not admit a sock. I lay down by him, snuggling, giggling, joking, but nothing was working.

I got his talker and typed in “Time for shoes and socks. I love you, Kepler.” I played it about three times to the lump in the bed hiding under the covers. Suddenly, the lump sat up and said “OK!”

Compared to other mornings when i have continued to try to talk him into something, this is like magic. My theory is that it shifts what his brain is doing and gives him a pathway to yes. He loves seeing the words and hearing them at the same time.

It was on the heels of that victory that I discovered the puppy munching on Kepler’s glasses. He had had them long enough to actually gnaw off one end of the strap. The bus would arrive in 4 minutes.

In a feat of organizational prowess, I was able to locate his old glasses which have a different type of strap. And somehow I convinced him to use that strap. I was busy typing on the talker about it but the bus was coming down the street so we just had to muddle through.

What a tremendous tool to have right at our fingertips! The pages can be personalized. I have begun to personalize his “people” page with photos and names. 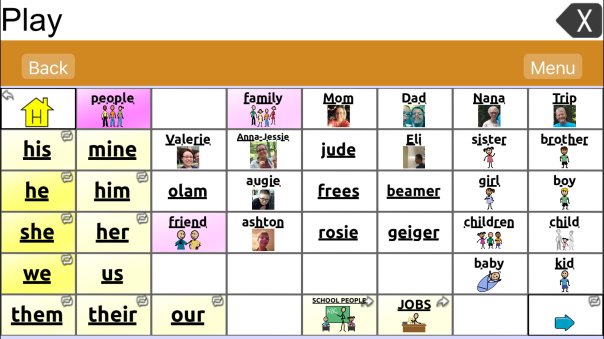 Stay tuned. I predict great things are going to come of using the talker.

4 thoughts on “A Little Kepler Story”