I was at a Thanksgiving party this past weekend with a few families from Kepler’s school. The guest list also included the kids’ Special Ed teacher and one of the wonderful aides who has been with us for a few years now. After dinner, listening to the squeals of glee from the basement as the kids romped and played, stories about traveling with the kids began to be shared.

I’m not a particularly dramatic person. While I do not actually think I am boring, my low-key, laid-back manner tends to fit more into the background than the spotlight. I like my stories, so I don’t mind not being in the spotlight. I just observed that my “traveling with kids” stories tend to be more about fun, meaningful times, and less about dramatic scenes including vomit, diarrhea, and emergencies.

Maybe dramatic stories get a bigger bang for their buck, but like I said, I like my stories. I like the memories we have made as a family.

On my blog, hot diggety dog, I get to tell MY stories MY way, and YOU get to decide whether or not you want to read them. Here, then, is the story, with all the little details, of blankets and Eli.

When I was expecting each of my babies, I made each of them a baby blanket. Valerie, my first baby, got a blanket made by a mother who had all the time in the world — tiny squares, hand quilting. I think I finished Jude’s much smaller, much less complicated blanket the night before he was born! Eli got a pieced quilt, but with MUCH larger squares (LOL). Although the first three quilts were mostly unisex, I was sure (without any medical confirmation) that Anna-Jessie was a girl; I chose a floral print.

Kepler got this whimsical, joyful Winnie the Pooh fabric. 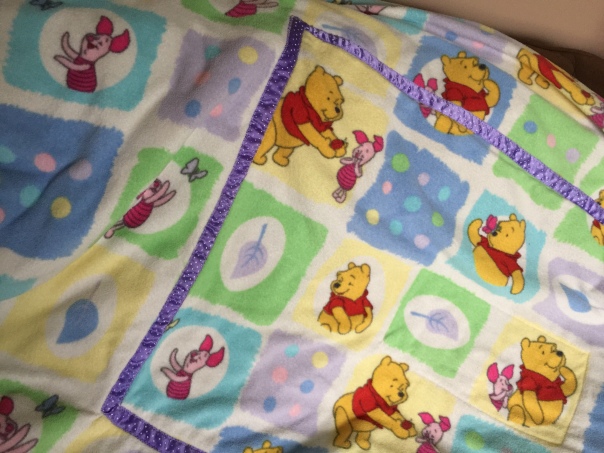 Kids are all so unique! Of all five of our kids, Valerie and Eli are the ones who wore their blankets out with all the love they gave to and received from their blankies. I remembered this years later when I heard about sensory processing disorder and saw that maybe Eli could have been diagnosed with that as as child.

I heard about weighted blankets. From the Magic Blanket website:

Recent studies have shown that deep pressure touch, the type of proprioceptive input generated from a
weighted blanket,  releases serotonin in the brain. This is a neurotransmitter that creates a feeling of calm
within our nervous system.

To find out more about how proprioceptive input and a weighted blanket can calm and comfort,  please talk
to an occupational therapist.

Sounds pretty good, doesn’t it! We procured one of these for Eli’s 19th birthday. When his belongings were discarded by his ex-girlfriend earlier this year, his weighted blanket was one of the things that she saw fit to throw away like trash. I was so sad about its loss until I realized that having to start over wasn’t necessarily a bad thing. This was when I decided to make him a new weighted blanket.

Knowing that Eli was going to be coming home after his stay in rehab (just recently), I planned to have his new blanket completed by the time he came home. As Robert Burns said in a slightly different form, “the best laid plans of mice and men often go awry.” (You REALLY should hop over here and read his wonderful poem “To a Mouse” aloud.)
So, twasn’t until about 20 days after he had come home that I finally finished his blanket.
For a weighted blanket, one sews an inner layer into channels (16 in my case), then fills each channel with about 3 TBSP of the kind of beads that fill beanie babies.  After filling the 16 channels, I sewed a horizontal seam,  sealing those 16 little compartments, twenty rows worth, 320 compartments all together.
The top layer fabric I chose was as soft as baby’s hair, which seemed like a really good idea in the store. As I considered how IN THE WORLD I was going to sew it though, not so much. I ended up added a backing layer to it to stabilize it, which worked beautifully.
Finally, it was time to assemble the layers. My machine hummed along, happy to be part of the creation. After sewing three sides together, I stalled again. I was just doing this all by feel, and I could see the blanket turning out whopper jawed, which I didn’t want.
Laid the whole thing out on the living room floor and aligned it and pinned it and felt like it would be ok. Sewed it up. Finished the opening by hand, and then just sat back and marveled. The top layer is the minky, soft brown, and the underside is the flannel with the coffee mug pattern. (I thought he could look at the coffee cups in the morning and wake up a little easier. HAHA!) 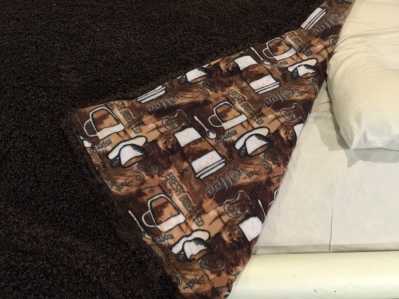 It may not have turned out to be EXACTLY 18 pounds, but the word from the guy under the blanket after the first night was PHENOMENAL. Phenomenal — I like that.

5 thoughts on “The Weighted Blanket is Complete!”