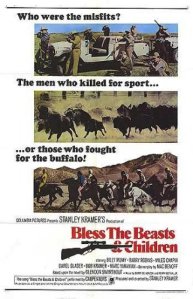 Well, I mean, today wasn’t the first time I have ever seen a PG movie. Today, I re-watched the first PG movie I ever saw.

It was a summer day in 1971, and the Ross family invited me to go to the drive-in with them. How I snuck a PG-movie past my parents, I have no idea. It wasn’t really my gig to sneak things past them anyway. More likely, we maybe just all assumed the movie was some Disney thing, and didn’t ask any more questions.

I’ve established elsewhere my childhood love for the Carpenters, as in Richard and Karen. Karen Carpenter sang the title song for this movie, and the melody motif was repeated throughout as background music. Listen here: Bless the Beasts and the Children

How things have changed since 1971. The movie takes place at a summer camp, run by people who most certainly were not asked to pass a background check, and no doubt, couldn’t pass one if they had been. “Wheaties,” the cabin leader for the boys, had a trunk full of pornography, alcohol, and firearms at the foot of his bed. Hey, I get that this wasn’t a Christian camp, but still.

The six boys were all misfits, or “dings,” as they were called by Wheaties. In a particularly hurtful address, Wheaties said, “You’re dings! You know what a ding is? That’s something that don’t fit anywhere, anytime, anything, any place. It uses up space, but it’s useless. Nobody wants it or knows what to do with it. So it’s got no use for living.”

Near the camp was a buffalo “reservation” where hunters, of whom Wheaties was one, were able to buy a ticket and shoot a corralled buffalo. At the time this film was made, buffalo were nearly an endangered species. In the film, the boys couldn’t bear to see these beautiful animals killed, as the killing was just for the heck of it.

When Wheaties dressed them down for being dings, he added, “Like those buffalo.” The dramatic arc in the film was about the boys leaving camp in the night and making their way to the buffalo preserve so as to let the buffalo go free. In an unforeseen twist, the buffalo ran out of the corral but then stayed close by to graze. Cotton, the young, angry, troubled camper who intended to join the Marines as soon as he turned 17, jumped in the jeep and took off after the buffalo to drive them away. The hunters had shown up by this time and in their attempts to shoot out the wheels of the jeep, they instead shot and killed Cotton.

I remember that moment, sitting in the Ross’s car, watching this film. Cotton was so passionate. It was almost more than I could take to see him falling out the door of the jeep, dead. I think I was just at the perfect age to have my emotions played like a guitar by the underdog nature of the group of boys, the cruelty of the other campers and the camp director, the desire for and capacity to carry out a big adventure, and the passion showed by these young men.

Best insult from the film happened when the boys were walking along a road, and a box truck roared by them, narrowly missing them. “Hippies! Hippies!” the boys yelled as the truck drove past.

Best inspirational poem from the film was attributed to a former camper, for dramatic purposes, but was written by one Walter Wintle.

Full many a race is lost
Ere ever a step is run;
And many a coward fails
Ere ever his work’s begun.
Think big and your deeds will grow,
Think small and you’ll fall behind,
Think that you can and you will;
It’s all in the state of mind.

If you think you’re outclassed, you are,
You’ve got to think high to rise,
You’ve got to be sure of yourself before
You can ever win a prize.
Life’s battles don’t always go
To the stronger or faster man,
But sooner or later, the [one] who wins,
Is the [person] who thinks he can.

Do bless the beasts and the children today.

What was your first PG movie?