As part of my ongoing journey of digging myself out of this dark hole of depression I’ve been in, someone suggested that I look for a part-time job. And while there are probably plenty of entry-level jobs at fast-food joints, grocery stores, and department stores, I just wasn’t excited about either minimum wage or smelling like a hamburger.

Not to mention, I have a little boy who gets off the school bus at 3:30 every day and who needs to have someone home to greet him. I’ve been that someone for all of his school years, and find it a little tricky to imagine anyone else being able to do the job. (No offense to my excellent older children who are quite capable of doing so.)

But in my semi-weekly internet job site surfing, I saw that UPS was looking for seasonal driver helpers. Having already concluded that I did not care to work inside, I realized that the driver helper position really appealed to my love of the outdoors, my enjoyment of variety, and the benefits of physical exercise. So, I applied.

That was a Monday. I received an immediate email scheduling me for an interview on Tuesday, where I was hired, and completed orientation on Wednesday.

I found waiting for a call the first few days to be stressful. They can call anytime from 7:30am to 12:00noon to ask you to work that day, and it is highly recommended that you not say no. If you say no, they may not even call again, because UPS is all about getting the packages delivered and ain’t nobody got time for voicemail and waiting around.

I’m the lady that waited on a particular fallen log in the Michigan wilderness for 8 hours one time waiting for a group of students to arrive, fearing that if I were to leave for even five minutes I might miss them and they might just walk on, missing the turn, and we’d never ever find each other and itwouldbeadisasterohmy.

I’m entering my third full week of being a driver helper, and have been working with the same driver most of the days, so it’s not quite as stressful wondering if I am going to work.

And I DO love being outside. We drive with the door open mostly, so there’s lot of fresh air. It’s also cold, but I’m dressed warmly and am for the most part quite comfortable. And I DO love the physical activity. I walk/run 6-7 miles five days per week on this job, made up of short bursts between the truck and the residences. It’s my own little form of high-intensity interval training. And I DO love the variety. Although it is the same route every day, my brain is getting a workout learning the layout of apartment complexes, and paying close attention to house numbers.

I could just turn my brain off and run where the driver tells me to go, but I find it much more interesting to be watching the screen where the stops are listed and anticipating which way I will run.

Most people probably do not do a whole lot of thinking about what a UPS driver does. At least, I really didn’t. They deliver packages. Obviously. But I’m learning how much more there is to it, and I have a newfound respect for drivers. They work hard, and they are very smart. I’ve learned quite a bit, and not just about the mechanics of delivery.

There are two more weeks to deliver before Christmas. After that, I may work a little during the week between Christmas and New Years, but that’s it.

Oh, and being a woman makes no difference in the requirements of the job. I am expected to lift the heavy packages and “walk briskly” just like a taller and stronger person might do. The heaviest package I’ve handled myself so far is 65 pounds, and that was pretty tricky. I’m sure I looked like a waddling penguin from the back, but I got it to the porch!

I will say though that I doubt any of the college guy helpers exclaimed with glee like I did when I saw the FULL rainbow. But I mean, it was a complete rainbow from one horizon to the other. I could HARDLY ignore it. 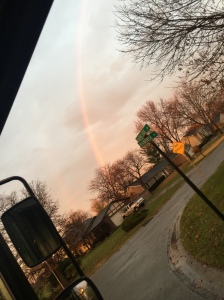 The first couple days of work I was trying to make do with boots I already had on hand. I discovered pretty quickly that 6.5-7 miles is not a “make do” distance. Thankfully, I really hit the jackpot with my new boots. Not because they were on sale, but because they were comfortable from the first step.

So, I would say Brown has done a lot for me. And I’m so glad. And, by the way, I’m actually doing some things for Brown as well. I love bringing a smiling face and a good word to customers and caring about what I am doing.

One thing I’m sure the world in general will appreciate about my experience is it is making me a better driver. By observing someone who is trained in specific and extensive safety measures, I’m learning to improve my own driving as well.

Be good to your UPS men and women. They are the modern-day Santa Clauses!

2 thoughts on “In Which Siouxsie Gets a Seasonal Job”