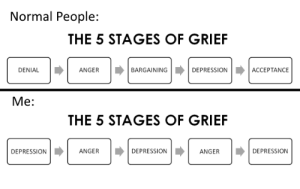 Grief has always seemed inaccessible to me. I haven’t wanted to feel the feelings of loss, desperation, helplessness, anger and shame. I’m not sure I’ve had much to grieve in my life. I’m pretty blessed. But, drug addiction in someone I love? That’s something worth grieving.

I think the chart sums up pretty well how I’ve gone about grieving. Depression, then the anger peeks out, then I decide the anger isn’t appropriate and I sink back into depression, then that pesky anger arises, and I tamp it down and find equilibrium in depression. The addiction issues arose even before my loved one actually started using drugs. And the denial was strong with me.

I grew up believing there wasn’t anything I couldn’t do. I had dreams of going to the Olympics for track and field. I thought I was going to be a psychologist who would pretty much cure my patients with a wise look. I believed my life would and should be smooth. I had an illusion of being in control of everything. HA.

When I had to face the fact of NOT being omniscient, omnipotent, and omnipresent, that. rocked. my. world. Talk about building your house on a foundation of sand. I had looked that sand over, proclaimed it solid as anything you’d ever want, and proudly built my entire edifice stone by stone, belief by belief, on that shifting, undependable base.

Apparently I didn’t get the memo that other people were not going to follow my prescribed plan for them. And by other people, I of course mean our children. Nope. They have their own dreams, their own plans, their own illusions of control. Who knew? Not I. And when my house started to crumble, I ran around shoring up this corner, applying useless repairs to that loadbearing wall, and imagining that my fixes were helping something.

But as time went on, I didn’t have enough hands to fix all the leaks and shore up all the crumbling parts. When the concept of illegal drug usage by my child came into my awareness, I simply could not comprehend what I was hearing. Surely it was a passing phase. Surely this child would be like me as a child and reject these illegal substances and activities. Surely this child would find his way in just a matter of minutes to a more wholesome, life-affirming way.

Instead, he found his way to addiction, arrest, jail, court, rehab, and lied about it all.

Along the way, I learned that me continually trying to fix this edifice I had erected was actually called “enabling.” Enabling is when you engage in behaviors that you think are going to help resolve a problem, and instead they exacerbate the problem. I think mothers are particularly susceptible to this. After all, we had this grown up addict in our wombs. We nursed them as babies. We held them and sang to them and walked slowly, seeing the world through their eyes.

Since his rehab days, two mothers I met there are grieving the permanent loss of their sons. Heroin is a horrible, horrible drug. Probably the rest of them are, too, but that heroin is the spectre of death disguised as a good time. I’ve been thrilled with every positive step our son has made toward recovery, toward sobriety, toward wholeness.

This is a child who loves his mama. He hates to see me sad. He grieves when he feels he has disappointed me. But no matter, NO MATTER, what I have ever said or done, it has not been enough to puncture the impenetrable wall of his grief and pain. Drugs have been enough, at least for short periods, but they of course have their problems as well.

To my utter bemusement, I have continued to speak affirmation, love, acceptance, and life, and he has continued to reject them for the short-term solace of an artificial high. Perhaps if I had ever been addicted, I would understand. I think I have a tiny window into the concept in how I have dealt with food at times. Someone thinks eating this food will eventually kill me? I don’t care! I want it now! Addiction is a liar and a thief and will not hesitate to take everything from you and those you love. Addiction also makes you a liar and a thief which then just perpetuates the problems. You get deeper and deeper into owing others for their attempts at mercy and grace. And while you’re getting deeper, you make choices that get you in even deeper.

We were under the impression that drug use was in the past. Denial is so easy to embrace. You want so badly to believe that the things you are seeing mean something other than that drugs are back in the picture. With our rosy glasses on, we chose to provide something to him, but this time, we said, would be the last. We wrote up a contract for repayment and behavioral expectations and consequences that would be real if he did not follow through on what he signed on for.

About a month after we all signed the agreement, at the end of December, I was presented with incontrovertible evidence that the agreement had been broken, that the lying was going on regularly, and that nothing we had said or done was enough to beat the lure of the drugs.

To his credit, he fulfilled his end of the agreement by moving out immediately. And this time, I knew that he had burned some serious bridges. I still love him and I always will. I no longer see it as my job to convince him that life without drugs is better than life with drugs. Nor am I trying to convince him of how valuable he is, how brilliant, how talented, how gifted, how beautiful, and how loved.

I’ve given up the last vestiges of imagining I have any control in the situation. So after years of the depression/anger/depression cycle, I have found some sort of acceptance. IT’S SO HARD THOUGH. I know that some addicts find their way out, and some do not. I long for him to find his way out of addiction permanently, to find a way of life that is fulfilling and brings his brilliance and his gifts to the world. And I’m at a place where I realize that HE is going to have to drive the vehicle of his own autonomy and agency on his own path.

The resources are there. He’s smart and has the capacity to be resourceful and creative. But those first steps of humbling himself, acknowledging the stumbling, coming to the end of his illusion of control, finding and celebrating the things he actually can control and then controlling them, taking responsibility, beginning to make amends for the damage he has caused to himself and others; the resources are there. He has what it takes, but he will have to be the one to discover that for himself.

The portrayal of the stages of grief here are misleading in their symmetry and equal length, but accurate in the content of each of the phases. I’m at the junction of dialogue/bargaining and acceptance and I’m experiencing empowerment, security, self-esteem and meaning more and more. I wish the same for my beautiful boy. ♥

6 thoughts on “Grieving the Desperation of Addiction”